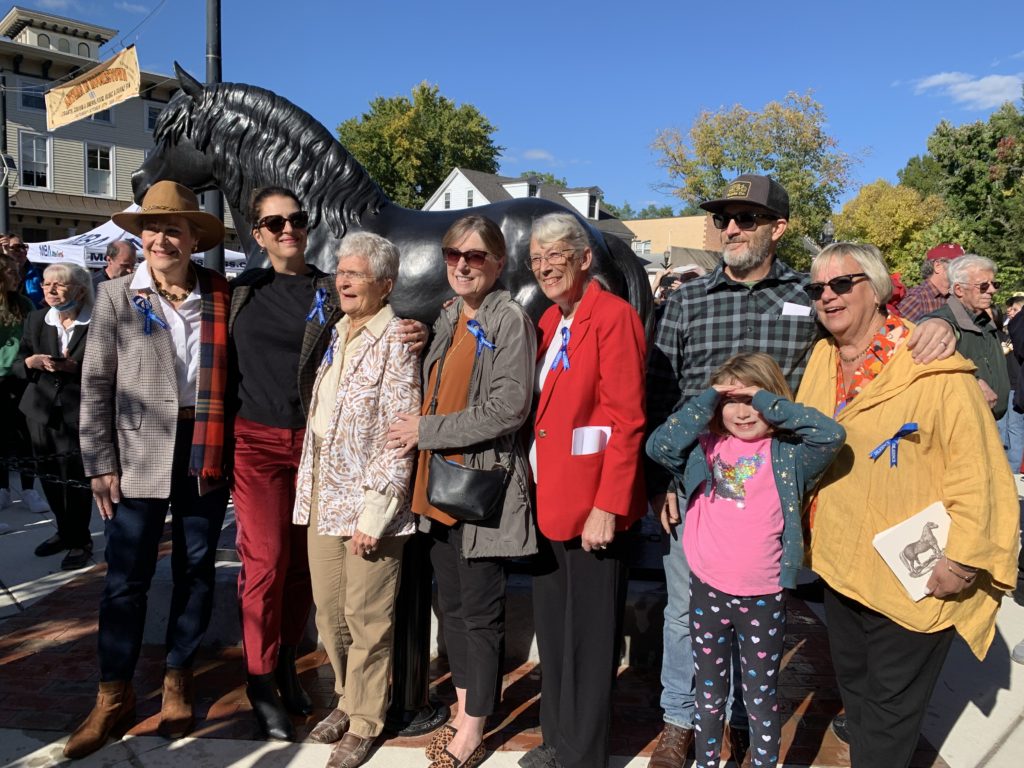 On a cool and crisp fall day recently, residents gathered on Main Street to witness the unveiling of Percheron Park’s main attraction – the Diligence horse sculpture.

“I don’t think we could have imagined it being a better day weather wise and crowd wise,” said Kathy Logue, president of the Friends of Percheron Park. “It was wonderful, and the crowd was waiting to see that statue …

“Joshua (Koffman), our sculptor, cut the ties so that we could unveil it, and the sounds and the applause and the roar of the crowd … It made it all worth it,” she added.

According to Percheron Park’s website, the township purchased the Main Street location – formerly a gas station – in 2008, but the tract of land sat vacant for the next 14 years as the lot underwent soil remediation and the township awaited the New Jersey Department of Environmental Protection’s signoff.

Earlier this month, the Friends and the community celebrated the park’s grand opening and its dedication of Diligence, a lifesize bronze statue of a Percheron stallion that is a tribute to Moorestown’s history.

“It was just overwhelming, and we are so grateful to all of the folks who did so much over the years to make it happen,” Logue noted. “While it was really nice to see the crowd and hear the roar of the crowd as it was unveiled, I must say that a couple of our members wandered by …

“We’re just still drawn to pass by and see a few folks wandering in, having a seat, enjoying the view and walking around the statue and enjoying it,” she added. “That’s what it was all about.” 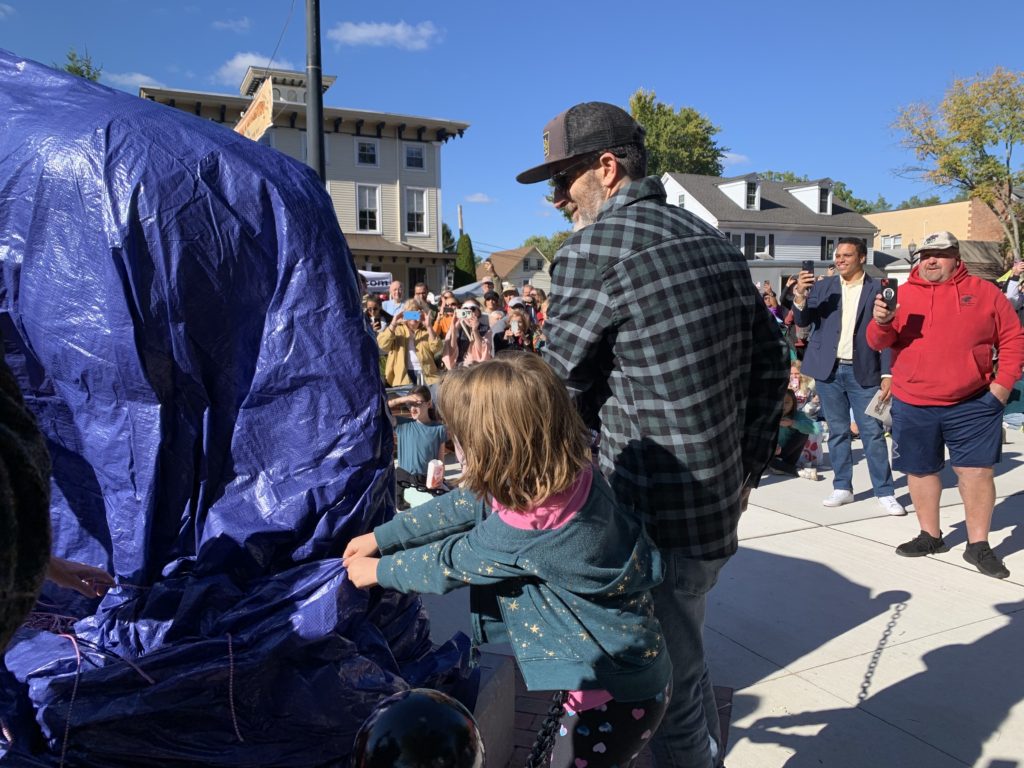 CHRISTINE HARKINSON/The Sun: Sculptor Joshua Koffman is the mastermind behind the lifesize Percheron horse statue. Here he gets ready – with help from his daughter Ruby – to remove the tarp and reveal Diligence to the township.

Located at the intersection of Main and High streets, Percheron Park offers residents and visitors a place to stop what they’re doing to take it in. The Friends have fundraised more than $200,000 for the sculpture and other design elements of the park. The site features a low brick wall at the street corner with some surrounding plantings, benches and stamped concrete with hoof prints.

“He was fantastic to work with, very accommodating and just a first-class guy,” Logue said of Koffman. “Absolutely a first-class sculptor.”

According to Percheron Park’s website, when Edward Harris II introduced the Percheron horse from France to the U.S. in 1839, agriculture was a primary occupation in Moorestown and the rest of the country. Harris realized that Percherons might improve American work horses, and he went to considerable effort to showcase their superior qualities.

By 1930, the Percheron had become the most important draft breed in the development of American agriculture, especially in the Midwest. Fast forward to 2006, when township council asked residents to suggest ideas for how to enhance the park. The Moorestown Garden Club presented a plan to council in 2011.

And the rest is history.

“Years ago, when the town first bought that site, there was a lot of discussion about whether or not it should be used for a park or should it remain commercial,” Logue recalled. “ … It’s such a small site that in today’s world, the required parking for a business would not be possible …

“It’s unique in that the site where the first gas station was built (in the township) comes back to remind us of the history of the site,” she added, “and it’s neat that Edward Harris lived just steps away (at Smith-Cadbury Mansion).”

Friends member Margo Foster – a driving force behind the project – was excited to see its completion.

“It’s been wonderful, and I’ve had a number of nice notes from friends who are very happy that this has been added to Moorestown,” she enthused. “ … The statue shows that Moorestonians have great insight into what would help our country, and it’s a symbol of our agricultural history.”

“ … I’m so happy to have been a part of bringing it to town, because it’s just something that Moorestown will enjoy for hundreds of years to come,” Logue said. “ … We may have kept the idea alive, but it takes a village to make it happen …

“It’s been anticipated for all this time and to actually see it finished, it’s just a dream come true for the whole group.”

For information on the park, visit percheronpark.org.

Moorestown, New Jersey — It’s sure to be a photo finish as the decade long race to open
Percheron Park enters the home stretch. On Saturday, Oct. 8 at 3 p.m. on Main Street,
Moorestown Township’s long–awaited Percheron Park will officially open with a Dedication
Ceremony unveiling Joshua Koffman’s “Diligence,” a Percheron horse sculpture serving as the
pocket park’s centerpiece.
The ceremony will feature remarks from township officials as well as members of The Friends of
Percheron Park, the nonprofit group whose vision and fundraising helped bring the park to life.
Following the ceremony, attendees can dine at food trucks and listen to live music.
The township purchased the Main Street location – formerly a gas station – in 2008. A sign that
read “Future Site of Percheron Park” promised the park’s eventual arrival, but the tract of land
sat vacant for the next 14 years as the lot underwent soil remediation and the township awaited
the New Jersey Department of Environmental Protection’s sign off.
Vacant no more, the pocket park will offer visitors to the town’s main thoroughfare a place to
take rest and maybe learn a bit about history. The life–sized bronze statue of a Percheron stallion
is a tribute to Moorestown’s place in American history. In 1839, Moorestown native Edward
Harris II brought the first Percheron stallions to the United States from France.
The Friends of Percheron Park fundraised more than $200,000 for the bronze sculpture and other
design elements of the park. The site features a low brick wall at the street corner with some
surrounding plantings, and Diligence, created by Philadelphia–based sculptor Joshua Koffman,
will be located behind some small shrubs. The site features stamped concrete with hoof prints
and benches for residents to stop and people watch.
Kathy Logue, president of the Friends of Percheron Park, said they are eager to bring art to Main
Street. She said while Haddonfield has its Hadrosaurus foulkii sculpture (fondly known as
“Haddy”), Moorestown will have “Diligence.”
111 WEST SECOND STREET ∙ MOORESTOWN ∙ NEW JERSEY 08057
Public Information Office Inquiries:
Kelly Flynn, Assistant Public Information Officer

The Friends of Percheron Park has announced the commissioning of Joshua Koffman of Philadelphia as the sculptor for the life-sized bronze representation of the Percheron stallion “Diligence” in Moorestown, NJ. Koffman holds a Bachelor of Arts degree in Fine Art from the University of California at Santa Cruz and a certificate from the Pennsylvania Academy of the Fine Arts, where he serves as a member of the faculty in Philadelphia.

Mr. Koffman has received a number of awards and honors for his work, which is displayed among private and public collections. (www.joshuakoffman.com) “We are very pleased to have the privilege of working with Joshua on this project so important to the history of Moorestown and our country,” commented Kathy Logue, president of The Friends of Percheron Park.
Click on the image to enlarge it. 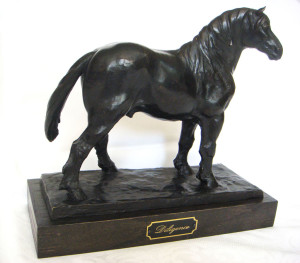 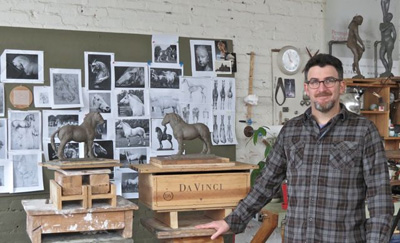 Sure to become a treasured Moorestown collectors item!

Our sincere Thank You to Bill Burris and Family, the Staff of Burris Construction Co. – most notably Nick Keenan and Kim Jordan, the Sponsors, Donors, and Supportive Citizens, for making the Burris Open House a SUCCESS! Congratulations to the lucky winner of our Grand Prize – A Brand New Fiat!